What Should You Do If You Were Injured By Someone Who Was Texting While Driving? 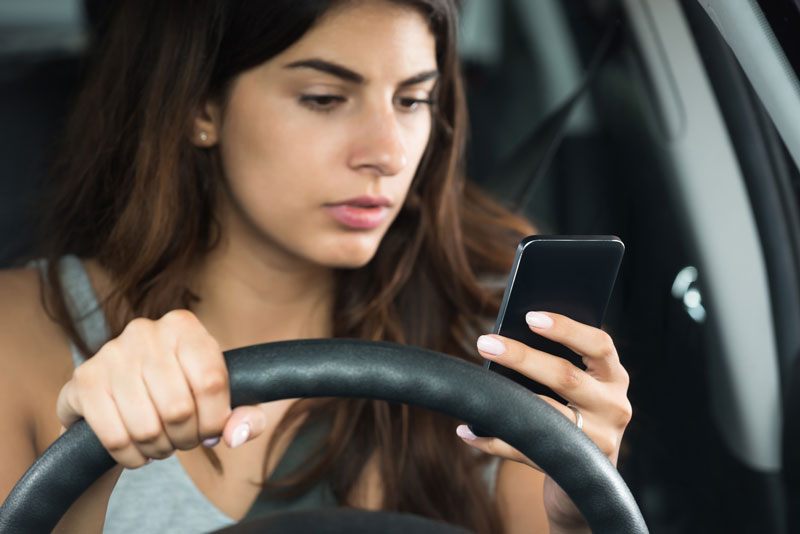 Unfortunately, thousands of motor vehicle collisions happen daily on our roads, and many result in serious injuries and death. While some of these accidents are unavoidable, the sad truth is that many of them are 100% preventable. Sometimes, people disregard safety and common sense and drive while distracted, causing unnecessary accidents. As you might imagine, one of the ultimate distractions is texting while driving. The National Highway Traffic Safety Administration recently reported that more than 18% of injury crashes were reported as “distraction-affected’ crashes.

However, despite knowing the risks, more and more people continue to text while driving, resulting in record numbers of accidents. And, the culprits are not always teenagers. In fact, in 2013, the AAA Foundation for Traffic Safety reported that 82% of adults ages 25-39 admitted to using their phone while driving, and a staggering 43% admitted to checking texts and sending messages “regularly.”

Texting While Driving: What If it Happens to You?

Here are some things to consider if you’ve been involved in a motor vehicle accident caused by any number of reasons, but particularly if texting while driving was involved . . .

If you have been injured in a motor vehicle accident that was caused by someone else, you may be considering bringing a lawsuit in order to recover damages for all you have gone through. If you are thinking about doing so, it is a good idea to have some idea of what you will face.

The basis for all personal injury lawsuits resulting from motor vehicle accidents is a legal concept known as negligence. If you cannot prove that the person who caused the accident was negligent in some way, your case is most likely a loser. You must sufficiently demonstrate to the insurance companies and/or the court that the other driver was negligent when he or she caused the accident. This is all a roundabout way of saying that you need to prove that the driver’s actions were responsible for the accident and resulting damages.

So, in your specific case, you must show that the driver’s actions of texting while driving (or some other negligent act or omission) directly caused the accident and your resulting injuries.

Since you have the obligation of proving that the driver’s negligence directly caused your damages, you have some work to do. In order to claim the other driver was texting while driving and hence distracted, you must present some actual evidence of this. Some of this type of evidence is difficult to obtain, but, with the assistance of a reputable, knowledgeable and experienced personal injury attorney, acquiring this proof becomes much easier. Contact Teale Law Today or call Attorney Charles Teale at 603-935-7245 to discuss your options.

The Evidence You Need

The driver’s cell phone service provider is the only entity that can release his or her phone records. However, it will be happy to comply with a court order instructing it to do so. Your attorney will help you obtain this evidence by filing the necessary motions with the court. The records will spell out the exact nature of the driver’s cell phone activity – including what was taking place at the moment of the accident. The records can provide evidence of phone calls, texting (sent and received) and locations of usage.

New Hampshire imposes upon its drivers a duty to drive reasonably and with care.  Further, New Hampshire RSA 265:79-c (Use of Mobile Electronic Devices While Driving; Prohibition) makes it illegal for people to text and drive.  RSA 265:79-c states, “No person, while driving a moving motor vehicle upon a way or temporarily halted in traffic for a traffic control device or other momentary delay, shall use any hand-held mobile electronic device capable of providing voice or data communication, including but not limited to: reading, composing, viewing, or posting any electronic message; or initiating, receiving, or conducting a conversation; or initiating a command or request to access the Internet; or inputting information into a global positioning system or navigation device; or manually typing data into any other portable electronic device. An operator of a motor vehicle who holds a cellular telephone or other electronic device capable of voice communication in the immediate proximity of his or her ear while such vehicle is in motion is presumed to be engaging in a call within the meaning of this section.”

Simply, drivers have a duty to operate their vehicles on the roadways without being distracted! When a driver does something that breaches that duty – such as texting while driving – and that driver causes an accident, he or she is liable for resulting damages.

So, What Are Damages

If you prove your case that the other driver texted while driving and caused your accident and your injuries, you are entitled to receive what is known as reasonable damages.

Reasonable damages may include the following:

In order to recover the damages that you are entitled to because someone was texting while driving and caused you injuries, you should contact a reputable, knowledgeable personal injury attorney to help you with your case. Evidence is very important in these types of cases. There are also important deadlines that cannot be missed. Attorney Charles Teale can help you effectively deal with insurance companies, medical care providers, the courts, and even your employer. Contact Teale Law today to schedule a complimentary consultation and evaluation of your case. We can be reached at 603-935-7425 or contact@tealelaw.com.